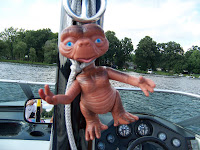 The note above followed the picture in an email from my brother Shane. When we we're kids, he really loved the movie ET. I guess things have changed.
He used to wear a necklace with ET's head on it. In his defense, he was probably 8 or 9. But we grew up seeing ET in the theater and we were young enough to think it was a pretty cool movie. It came out when movies were an Event, and stayed in the theaters for months.

So, back to the hanging of ET.

A few summers ago, Connie and I were up in Lake Leelanau visiting my mom for the weekend. C. wanted to go see some shops, and we came upon a thrift store, that I swear was a storage bin for old shit from Sanford and Son.

And there on a table piled with misc. crap sat ET.
I bought him for Shane for his birthday as a joke.

Fast forward a few weeks. Shane called to invite me out on the lake with him and Jeff for the day. Boating is always preferable to sweating, so I took him up on the offer. I packed up ET and brought him along. When I got to Jeff's house, I pulled ET out of my bag and handed him to Shane.

"What the hell is this?"

Shane was not impressed, and I was sick of driving around with him in my car.
His head had already fallen off on me, and I'd performed emergency surgery in the car.

But even ailens need a little sun, so I brought him on the boat.

And then forgot him. I'd planned to take him and find him a good home. I felt it was my duty after I'd paid a whole quarter.

A few days later, the ransom letter arrived in my Inbox.