I have a new obsession about 10 years late. The show 24 starring Kiefer Sutherland as a government agent for a fake branch of the government called CTU, which stands for Counter Terrorism Unit.

CTU isn't real of course and neither is the show but I'm really enjoying it. It's a thrill ride and I know I'm late to the party, but I'm so happy I found it on Netflix. It's addicting like nothing I've seen on television in a long time.

Kiefer Sutherland is the star of the show and he plays an Agent named, Jack Bauer. A wholly courageous bad ass who does what he feels is right, even when he's breaking the rules. I agree with that philosophy. I'd rather have you break the rules and do something "wrong", then always following orders blindly but never sticking your neck out for something you believe in.

Obviously, at the end of the day, it's a tv show and should be viewed as entertainment and this shouldn't be able to persuade you to do anything different in your actual real life.

I'm loving this show and I can't wait to see where it heads. And a side note for anyone that doesn't think writers matter: 24 is a show with a great cast and imaginative and unpredictable story lines.

Proof positive what good writing can do for a show. 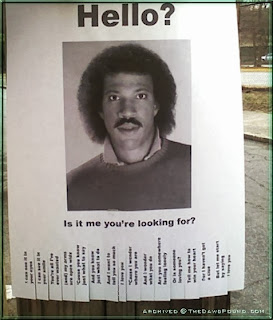 Failing at this blogging thing daily. Next week will be better.

Sometimes I have trouble focusing and lose track of what's happening.
Posted by Kelly at 12:55 PM 1 comment:

In April of this year, myself and some fellow creatives I know, brainstormed and came up a creative challenge for ourselves called, JFDI Challenge, which stands for Just Fucking Do It.

I was a writer who while writes daily for her job, wasn't doing any in my personal life. And within 80% of copywriters there lurks a "real writer" wanting to get out and put their true passion to paper.

And so, I accepted the challenge and for 30 Days straight I submitted a new story or an edited redo of a previous story. Sometimes we just can't gain the perspective we need to do our art, till we step back.

As I suspected, when I started, my work was rusty and sentences weren't artsy or flowing. Sometimes they just sat upon the page like lead weights. But as the month progressed, I saw good raw materials, themes, and ideas worth exploring. And wasn't that the point?

Since the challenge has ended, the creative part of me that I really need to work on fostering every day lay dormant. Until today.

My new challenge is to blog again. Every day. I used to start every work day like this and while math isn't my forte, at the end of one year, 365 days of expression, story ideas, or just a two sentence blog will be awaiting me.

As the challenge name says: Just Fucking Do It. 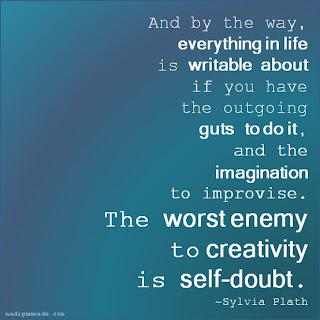 So very true. I've talked about it for so very long, but now I'm actually excited about starting this process, and getting it down on paper. I know I have the talent, I just need to forgive all the shitty first drafts that are about to come with it.

Writing has always helped soothe my soul, and to that end I think the first step should be a rough outline of what stories I want to include in the book.

I love traveling to new places. I return with new inspiration and drive to push forward.

Onto writing and the gym I go. Those are a few more pieces of the puzzle of my life that need to get fit into the whole deal.

Barbara and the Wonderboy 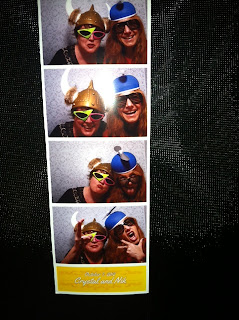 I'm still reeling from my weekend adventures. Feeling like I've got an emotional hangover today.

It was all good things but just a lot of big emotional things this past weekend. First off, I made my first ever trip to Texas to visit Barb, a dear friend of Nevada's. So that was awesome to spend time with somebody who also knew and loved her. It made me feel less like a weirdo, seeing somebody else's house also decked out in Nevada photos and artifacts.

As Barb said, "We went through a battle together. We totally have that solider bond."

Yes we do. And emotionally, we're both in much better states of mind. But this time of year is hard. It's Nevada's anniversary so it feels heavy even before I do anything.

But I loved seeing where Barb lived and seeing her ranch with all the crazy animals. And I can finally check Lukenbach off my list. I've been there! Small as hell but very cool.

Then, the main event. Nik's wedding. Nik and I met when we were going to school in Atlanta at Portfolio Center. Nik was one of the youngest people in our program and I was one of the oldest. There's an eight year age gap between us. I've always felt close to Nik. In part, I think because he reminds me of my older brother Shane.

And he's just that guy that's always there for his friends. Did we talk every day on the phone or even email daily?  No, we didn't. But we've maintained a friendship over a nine year span. We haven't lived in the same place since 2003. And yet, in 2012, we're still connected enough that when he invited me to his wedding in Austin, there was only one possible answer.

I celebrated with Nik when he turned 21. And when my dad died, he called and left me a voice mail telling me he loved me. He proceeded to instruct me to go listen to Johnny Cash's Sunday Morning Coming Down.

He's not much of a talker on the phone... but in October of 2009 and after, whenever I called, he'd answer or call me back shortly. Then my dad died and he continued to be there. I once remarked, "It's weird how you keep answering the phone."

Nik told me, "I don' want it to be the one day you decide, you're just going to end it all and I didn't pick up."

He's also one of the most talented and gifted writers I've ever met. Back in school, I deemed him "Wonderboy." Partly inspired by the movie, Wonderboys about a writing teacher and his protege.

It was awesome to see Wonderboy so happy and to witness him getting married. 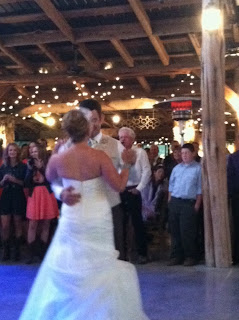 Looking forward to seeing where our many more years of friendship will take us.

Turns out, He can console 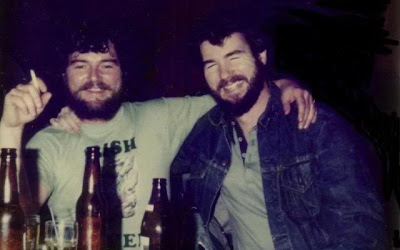 "Kelly, I was sorry to hear about the loss of your friend today as we talked on the phone. It even made me cry as I was talking to you. I have experienced those type of losses but that doesn't make your any less hurtful. By expierence I can tell you that as cliche as it is "time heals all wounds" it actually doesn't heal them but they will become less jagged. Trust me."

2012 is shaping up to be a great year, and I'm only half way through. Especially when one compares it to 2009 and 2010 and let's be honest, 2011 wasn't that great either.
This wasn't to be a blog by Debbie Downer though so onto why things are good:

1. My new house: Loving it. I am still working on decorating it. But I'm loving it. Coming home every day to my own space that I pay for all by myself has given me a sense of contentment and peace I didn't think one would find in a mere house. As I slowly turn into a home, I love it more every day. I look forward to projects in my yard, to finding the perfect kitchen table, and to painting my bathroom my favorite color.

2. My new dog. Yes, part of the reason I wanted a house (besides getting away from the cheap ass landlord) was so that I could get a pet again. So about six weeks ago I adopted a puppy. I never intended to get a dog that was so young, but like people you either have chemistry or you don't. We had chemistry from that first meeting at the shelter in Pontiac.
Scout ( her name was Marigold) and I had an instant connection. She put her paw on my leg and laid her soft puppy head on my lap and that was it. She picked me as much as I picked her.

Life with her hasn't been dull and gets better every day as we get to know each other and our respective quirks.
Scout enjoys cuddle time every morning when she first wakes up. She grunts her approval when she's done eating and when we ride in the car, she puts her paws on the console so she can look out the front window and periodically leans over and licks my arm.

3. The third reason why 2012 is shaping into awesome is because I have a new job. I've only been at my new place for just under two weeks and I can already tell that I'm going to love it here. It's a Social Media Company, so I'm learning a whole new set of skills, which makes me happy. The company really values the employees and treats us with respect. I'm three miles away from my house, and I can bring Scout to work sometimes.
You can't ask for more than that.

After being at my lowest, I think it's making me appreciate the good things even more.
I've started eating healthy again and exercising so there's really no limits on where I can go.
Come on 2012: Bring me the love of my life. I'm ready.

A Home was House warmed

2012 is turning out to be an eventful year as we approach the fourth month of it.

I became a homeowner for the first time after finally deciding I've had enough of my shitty but nicely located flat in Royal Oak. I grew tired of all the quirks of my flat. Like the fact that I couldn't ever control the cold water in my shower. I'd had enough of the neighbor lady downstairs and her antics with all her gentleman callers. Enough was enough.

And because the Detroit economy is such a mess, it was time to make it work to my advantage. Thus, as of January 26th, I became a homeowner in Berkley. This past weekend, I had a proper housewarming party. Basically a coming out party for my house.

The party was by all accounts a success. Meaning that unlike my party that I had in the 8th grade the guy I have taken a liking to, actually did come and didn't make out with a girlfriend in my laundry room. Progress people.

It was awesome to have all my good friends and my family all hanging out for an evening. Lots of drinks, good food, and conversation. I was nervous worrying people would find my party lame and leave at 7:30 pm.

None of that happened. And instead for one night, I partied like a 21 year old.

I'm looking forward to many more parties and celebrations in my new home this year.

Every day that I come home here, I am in awe that I OWN it.
Posted by Kelly at 6:58 PM No comments: